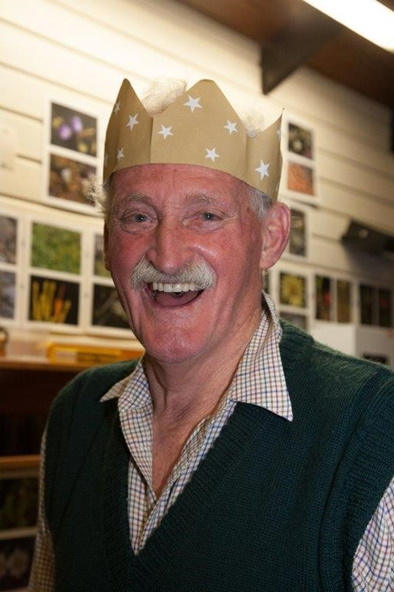 On behalf of the NPS I am honoured to say a few words about our beloved friend Carl Thompson. He was our Patron, President, Chairman of the Honours Board, Committee member, field trip organiser, and our pre-eminent Father Christmas. He was awarded FNPSNZ and Life Membership to our Society. He was, and remains, the true face of our Society.

Carl was everywhere. Easy to find. His booming laugh shook the ground, caused lights to sway, and nearby birds to cease singing. You heard and felt him approaching: his energy dominated the forest and any room he was in. We always knew where Carl was – both by day, and by night.

I haven’t met anyone who loved Mother Nature more than Carl did. Alpine insects, skinks, spiders, frogs, butterflies, cave wetas, and, of course, honey bees were the love of his life, and fodder for his macro lens. He was a walking encyclopaedia on bees. He knew all his bees by name. Roll after roll of Velvia film paid homage to them. He loved landscape too: wilderness and alpine areas drew him out to catch the early morning sun. Carl was at home in big landscapes – if he had a camera in his hand, he was happy wherever he was. He was a passionate and gifted nature photographer, whose wonderful images he leaves us to remember him by.

Carl loved his Nikon camera, his tripod, and Velvia film. More lately his tripod became a trusty aid for crossing streams and slippery stones. He liked standing in his wet mud-stained sneakers in streams and rivers, seeking that special shot of light dancing on the water. And occasionally, the water took its revenge. Such as when his tripod subsided into a gleeful stream, taking his camera with it. He appeared carrying his wet camera before me, somehow expecting a miracle to happen. I remember firing the shutter and drying out the camera as best I could throughout that night. The camera survived. Carl willed it to live.

Carl loved his coffee: before, during, and after any photographic foray. It kept him alive, along with the wonderful conversations that came along with drinking it. He kept us entertained for hours all matters of photography.

So long as it included film. Carl avoided digital photography like the plague. Fought it tooth and nail. At our monthly meetings when the rest of us had shown their digital pics, out would come the Leica projector and on would come Carl’s slides. Always better than our pathetic efforts with 1s and zeros. He hated computers too. Explaining to Carl how his computer software worked, was a similar experience to a root canal filling.

Behind Carl stood a magical person – his wife, Margaret. Loving, all withstanding, coping, cooking, keeping Carl on track and on time. Keeping Carl, and herself, somehow sane. I remember he always provided the traditional Christmas Plum Pudding at our mid-winter’s celebration at the Cass Research Station – made, lovingly of course, by Margaret.

So, Carl has left us. It’s hard to believe that he’s gone. That big laugh, that light, that huge passion for life, has journeyed on. Our love and blessings go with him. He is in a place of deep healing, where he is safe, much loved, and at peace.

Soon Carl will open his new eyes to marvel at what he sees. Breathtaking: all those bees! Then he will come to realise they’re all stars. The stars of the Cosmos.

On behalf of all members of NPS I extend our abiding love and condolences to Margaret, and all of Carl’s big family.