December, beloved mother of Maureen, Michael, and Kevin after a sudden short illness at the age of 73. She is fondly remembered by her family, many friends, and fellow photographers from New Zealand and around the world.

I got to know Anne in her later years as an accomplished photographer in a wide range of genres including nature, portrait, and landscapes.

She was a member of the Nature Photographic Society until a worsening breathing disorder and an injury to her hip from a fall restricted her ability to get out and about as she was used to.  Anne was determined to carry on regardless of her failing health and restricted mobility making the most of what she could do, mostly photographing from her car or a chair and with a portable nebuliser in tow.

Over the years Anne has been a member of several Photography Clubs most recently NPSNZ, CPS and PSNZ.  She was very active in the competitive side of both CPS and PSNZ achieving many high-ranking awards with her expertly crafted images.  This year she had her work featured in the NZ Camera Book which showcases a collection of outstanding images from members of PSNZ.

She was well known for her colourful language and telling it how she saw it, but had a heart of gold, often taking newbie photographers under her wing showing them the ways “out around the traps” which is how I got to know her.  Over the years we have been on many photography adventures, out and about in our wilderness areas staying in Shearers quarters at Mt Arrowsmith and Castleridge Station near Lake Heron, to name a few.  On her 70th birthday at Castleridge Station with a group of fellow enthusiasts, we woke up to knee deep snow and magical light, beautiful if not a little challenging to photograph.  The stars were just incredible and I will always remember this trip with affection.

She will live on in her beautifully captured images.

A memorial service was held  in St’s Peter and Paul Catholic church in Waimea West, Nelson on the 3rd of January 2023 where she is now buried. 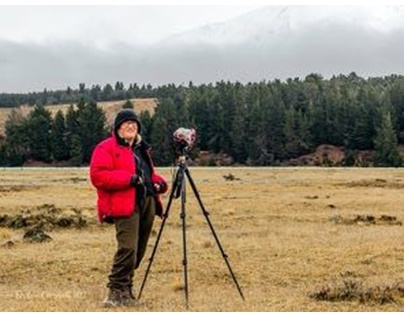