14 well rested souls strolled to a leisurely breakfast at 66 Conical Hill, Hanmer on Saturday morning
April 14. Not for Carl “Bee” T’s guests, the trauma of being dragged from warm sheets at 5
am to add to our already voluminous collection of pictures of the sun crawling over the horizon
while we stand freezing in a field; oh no, we went for luxury and an 8:30am start.

The group who arrived on Friday afternoon (ostensibly to take pictures but really to grab one of the
two comfortable beds) were treated to some early fungi at the old Hanmer Hospital site where, as
well as evocative memories, visitors are now encouraged.

The weather looked unpromising but snow on the surrounding hills gave a hint of photographic
possibilities. The Molesworth had closed the previous weekend and Acheron was fenced off but our
convoy followed Carl up Jack’s Pass with several stops to enjoy stunning early winter vistas and snow
remarkably deep for April. The dark wilding pines on the hillsides made interesting but elusive
patterns. At the junction of Jacks and Jollies Pass roads we turned to Lake Tennyson, travelling
alongside the Wairau and turned into St James Homestead- a venue designed solely for
photographers. The old wool shed-broken down and dangerous-but oh so picturesque, rusting
corrugated iron buildings, attractive pathways, gates and the icing on the icy cake, three lone
chimneys waiting for Christmas. A beautiful piebald pony ran up to greet Carl, but heard Nadine
crunch into an apple and ran 50m to get her share (Although I had my exposure adjusted for snow, I
machine-gunned the horse running and actually have a picture with all four feet (of the horse !) off
the ground-Muggeridge was right).

On through the breathtaking scenery to Lake Tennyson for lunch with the two snowmen wading in
the Lake. Although that was effectively the end of the photographic journey, Carolyn E made the
astute observation that if the weather had been sunny we would have no pictures at all.
Back to the houses, a potluck dinner with, as usual, food for 100, with the bright chat and
camaraderie that all Nature gatherings engender. Most opted for a reasonably early night.

Next morning we actioned a 4 page list of instructions on how to clean houses and then followed
Carl past the coffee bars that we all noted for later, to visit the beehives. As some were keeping a
healthy distance, one wit called “close the gate, they’ll get out” and to everyone’s delight, the gate
was slammed shut. Onto a farm with remarkably beautiful wild cherry trees covering the hillside.

People now wandered off for coffee, lunch and another fungi hunt, then wended their ways home
“tired but happy” as I was instructed, in primary school, to end all reports. 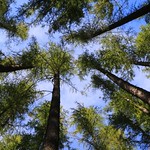 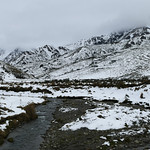 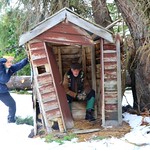 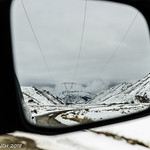 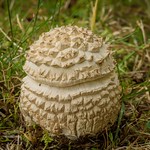