On the 15th October 14 brave souls flew to the Chatham’s on a small aircraft.  Fortunately the weather was perfect and it was a very smooth two hour flight.  We were met at the airport and taken by bus to Hotel Chathams.  Tea that night was crayfish and blue cod, lovely, what more could we want.

What more could we want!!  Maybe some good weather, but the weather gods were not kind to us.  Wednesday was very wet and blowing a gale.  We tried to go south to Awatutara Reserve but it was just too wet.  With windows covered in mud it was not a good look, so instead we visited Kopinga Marae which was built as a tribute to Morori ancestors.  It was very interesting hearing the history of Chatham’s Morori and Maori.

Thursday, there was hope of a sunrise but again the weather was not great.  A few showers during the day had us all a little wet and in between showers we visited Contemplation Bay.  It’s very difficult to visit some of these areas as they are privately owned and a fee is paid to cross the land.  Fortunately, Toni, who owns the Chathams Hotel, also owns the land.  Nunuku’s  cave with petro glyphs was more interesting Morori history.  Some weird Akeake trees twisted by the wind were a photographer’s dream.  Our last stop for the day was a forest of Kopi Trees. (Karaka)

Friday, we had sunshine, so nice to see the sun.  While we were at the amazing basalt columns, dating back to 79 million years ago, our bus broke down.  It was suggested we push the bus, which we did without success as some parts necessary to make it go had fallen off!!  We had extra time here which we all enjoyed and were finally rescued by two mini vans.  Then off to visit Waitangi West and the early settler’s Stone Cottage.  Built 1870 from blocks of solidified volcanic ash, this dwelling has no power.  Helen, the resident of this cottage is an amazing lady with a beautiful garden, chickens and dogs. An interesting day.

Saturday, we visited sites in the north.  Firstly we went to visit Wharekauri and walked down to the Splattered Rocks (the volcanic formation on the beach), where we saw Chatham Island Forget-me-nots growing in their own environment.  So good to see.  Today we had the paparazzi with us as they were doing a piece on Women of the Chatham’s, which included Toni, our tour guide and hotelier.  Unfortunately their car broke down, so we again had our lunch in the bus while we waited for them to be rescued. Then off to the Nikau Conservation Reserve, walking amongst dense forest, as the Chatham’s used to be.

Sunday was a great day.  We headed for the Hapupu Reserve to see the famed Moriori Rakau Momori – the tree carving, or dendroglyphs, of which there are only 4 left in the wild. Then on our way to Point Munning seal colony we called in to Muirson’s farm to see the remains of a huge Sunderland Flying Boat which sank at the Chatham’s in WWII, also a huge amount of old junk that had been collected, tractors, aircraft, wheels, you name it, it was there.
On the rocks of Point Munning it was great to see the fur seals; the young ones in particular were so cute.  Also, there was a nesting Shag with a very young chick, no feathers just fluff,

Monday, we finally visited the Awatutara Reserve down in the south west of the island.  We did see wood pigeons and fantails but there was not a lot of bird life, maybe it’s been to wet. Then on to see the statue of Tommy Solomon on the way to Admirals Farm homestead where we were treated to a BBQ.  This stunning garden and endemic plant restoration nursery is the property of Toni’s parents, Val Snr and Lois Croon.  The BBQ was amazing, blue cod, paua, crayfish, salads and lovely dessert.

Tuesday 22nd, reluctantly seven of us made our way to the airport.  There was so much more to see.  We have seen far more than I can include here.  It has been amazing regardless of the weather, there have been so many laughs regarding broken vans, buses and a bridge, but everybody took it in their stride.  The food and wine was great, as was the company.  Some of us even managed to watch the rugby but there were some very tired eyes the next day. Our thanks must go to Toni, Debbie and Matilda who tried so hard to take us where we wanted to go and were fun to be with.

Thanks also to Ken and Kathy for travel organisation

It was an amazing week one I am so pleased I was part of. 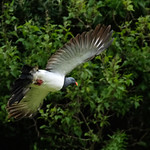 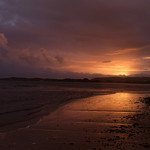 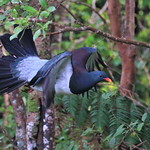 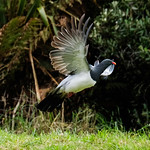 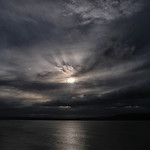