Saturday 3rd July 12 club members, super excited and a little anxious met at Te Anau Helicopter Services at 10am for check-in and weigh-in.  Thankfully, we all came in under weight and didn’t have to pay for an extra helicopter.
Just as well they weighed us before a delicious morning tea was provided while the helicopters were being loaded. The trip in involved 3 helicopter flights using 2 Squirrel helicopters. Greg and Mike, our pilots took us on an amazing 20-minute flight over snow covered mountains from Manapouri, over the Grebe Valley, past the Dusky Track, landing at Supper Cove on a stony beach.
We were met on the beach by a friendly team member from Pure Salt who ferried us out by tender to our home for the next 6 days, an ex-navy ship called Flightless. We were welcomed on board by the crew from Pure Salt, Sean, Brad, Anna, and Lauren. After a briefing and having been shown our accommodation, we were served a delicious lunch of hot soup and freshly made focaccia bread.
Early afternoon we headed off down Dusky Sound, sailing through Cook Channel, Bowen Channel, past Long Island, and Indian Island, through the channel between Anchor Island and Resolution Island. We photographed 3 waterfalls, seascapes, and a short window of pink clouds at sunset. Evening saw us anchor for the night at Cormorant Cove. Anna and Lauren served us dinner, a beautiful fresh seafood basket with salads. Having experienced such an amazing exhilarating day everyone headed off to bed early, hoping for a good night’s sleep and looking forward to our next day’s adventure.

Overnight in Cormorant Cove, then the first stop was Pigeon Island, to see where Richard Henry, one of the world’s first people to use an island sanctuary for conservation, did his bird relocations. Little remains but the chimney of his house, and the remains of the punga enclosure where the birds were kept.  And the great view from his lookout. While there we saw yellow-heads, for many of us a first sighting, as well as several other birds – tomtit, fantail, tui, bellbird.  Lunch was in the shadow of an amazing cliff in Facile Harbour, where we saw starfish, jellyfish, and kina and heard the story of a ship named the same as Cook’s ship Endeavour which was scuttled in the cove for the insurance money. On to Anchor Island spotting Buller’s mollymawk on the way. We landed and a group of us walked up to Lake Kirirua through the bush on a reasonable challenging track. On the way spotted tomtit, robin, black fantail, saddle-back and kaka. After the walk we went back to spend the night at Shark Cove. Brad and Lauren took some of us ashore to try Astro-photography. Not a lot was taken but it was a lot of fun, and a lovely end to a great day.

After a peaceful night at Shark Cove, the Canon users shared macro lenses around to take photos of a moth named Flightless. A Nikon user tried stacking with many supervisors offering advice. Cell phone experts demonstrated their skills too, all with varying success. Unfortunately, as no model release was signed, photos are not able to be shared.
Following morning tea of scones and Brad at helm, we had a repeat of the 9 Fathoms waterfall then a stunning double rainbow. As we travelled parallel to Long Island, we watched a DOC tender checking traps along of south coast of the island.
Willy Willies of sea spray spun up by the strong winds coming down the valleys entertained us as we neared the open sea. Another waterfall, Cascade Falls, appeared from a cave in the cliff and fell to the sea over the rocks. As the wind caught the spilling water, it created more spinning clouds of mist.  The Black backed gulls appeared to be flying backwards as the winds increased to around 45 knots. We continued out towards the open sea with the wind increasing and whipping up the spray into the air from waves crashing on rocks and small islands.
We sheltered in one of the small coves of Anchor Island for lunch – curry, rice, and Naan bread. Then back along Long Island heading inland and north through Acheron Passage past aptly named Wet Jacket Cove to Vancouver Arm. Another stop at Acheron Waterfall then past Richard / Hannibal Hayes (Samantha Hayes’ father) accommodation and fishing boat, complete with helicopter pad, at Sunday Cove.
As rain set in late in the day, the wind dropped, and we anchored for the night and a dinner of venison followed by chocolate brownies and homemade ice cream. Some ended the day with a soak in hot tub.

Rain the previous day made all my dreams come true…..cloud-draped recessions and waterfalls hurling themselves over cliffs, thundering into the dark waters of the fiord or blowing gauzily in the wind. I didn’t know where to focus as the mist swirled around the ridges, changing the scene within seconds. Only when I checked my camera images did I realize I recorded my favourite waterfall only on my phone. Guess I’ll have to go back.
The moody mist that enthralled us in the morning eventually dissipated mid-afternoon, replaced by high cloud. Our feast of waterfalls continued in the afternoon, and we lingered many a time for the perfect photo composition and / or video, variety abounded from large ones cascading over more or less bare rock in plain view, some partly obscured by overhanging bush and some petite with vegetation visible behind the water flow.
Vista was ever changing as we travelled pass small islands and through larger passages. To round off the day we did a spot of fishing in the Acheron Passage- Blue cod, Terakihi, an Octopus (thrown back), and some other species were brought aboard.
Another special day in our bit of paradise.

First activity for the day was Cooks Landing where astronomer William Wales (not the prince!) set up the co-ordinates for NZ in 1773. The Monowai survey in 1995 put him only 15mins out i.e., nearly 200 years later. Half a musket shot away from that site they set up a brewery, sailmaker & cooper workshops. The first brew was not universally approved of, but the addition of the crew’s daily rum ration made it just drinkable!
Spent the afternoon moored off Anchor Island where, in our IRBs, we passed crayfish landing barges & were entertained by a bevy of cute baby seals.  In 1792 Capt. William Raven sailed “Britannia” into Dusky Sound leaving 12 sailors to harvest seal skins for export to China. (Yes, we were dealing with China then!) It took 2 weeks to build a thatched house & drying room. One of the sailors was the carpenter Thomas Moore who built the first schooner in NZ of native wood, which was left in the Luncheon Cove Inlet when Capt. Raven returned 8 months later & was unhappy with just 4500 seal skins! so took the crew home.
Capt. Bampton struck a secret deal with Capt. Raven for the schooner still on the stocks in Luncheon Cove.  His ship the Endeavour was unseaworthy so scuttled in Facile Harbour.  After completing the schooner, he sailed off with 90 crew on board.  This was the first ship built in New Zealand by Europeans. Of note, Brad (our engineer) only had 6 “crew” on his IRB & needed a boat tow back to Mother Ship!!

Up, dress, pack our belongings and vacate our bunkrooms by 8.00am. The weather is misty and moody with a fresh dusting of snow on the inland mountain tops. Rain comes and goes all morning.
We edge our way out of beautiful Sportsman’s Cove through the narrow gap and turn right, motoring slowly along the northern side of Coopers Island. Our destination is Supper Cove where we will meet the helicopters for our return flight. Everything must be weighed, people, bags, even the rubbish being taken out.
Then we wait. Will the helicopters be able to get in? What if they can’t? There’s lots of laughter. We admire Kathy’s new waterproof leggings fashioned from brown rubbish bags. Group photos are taken.
Finally, news, the first helicopter is about to arrive. Due to the tides the landing spot is even smaller than when we arrived. A flurry of activity as the first group boards the IRB, goes ashore and depart. The second helicopter is quickly in, unloaded, reloaded and off. Finally, the third group are away, up amongst the beautiful snow-covered peaks, over Centre Pass to the airfield.
So many photos, so many memories, so much laughter. Thank you, Kath for organising such a wonderful trip. 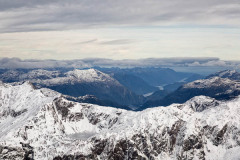 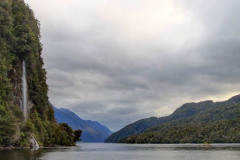 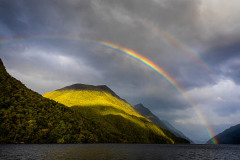 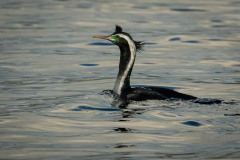 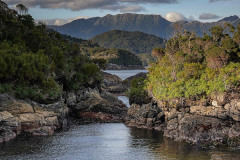 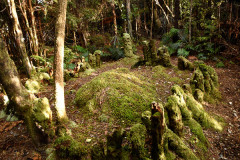 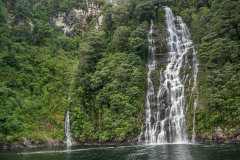 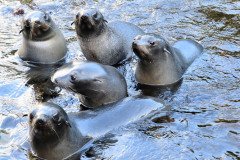 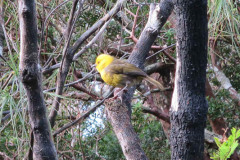 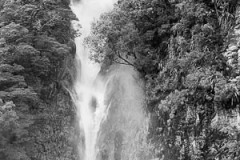 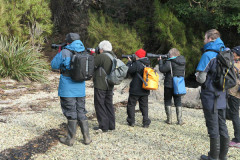 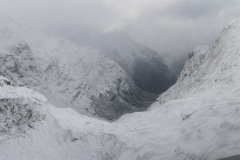