Five keen photographers joined Peter on Wednesday morning for a walk around the Heathcote Salt Marshes with the aim of getting some Bird and Landscape images.
In fine weather we headed off wandering around the water’s edge in the hope of spotting various birds in their natural surroundings. The first bird we came across was a Kingfisher just beyond the carpark area and then further along the path a few more. Unfortunately with the water still high plus wandering dogs made it very difficult to find the kingfishers in their feeding habitat.
Species we did see were Cormorants, White Faced Herons, one having a piece of straw in its bill, we were told they were nesting in the area. The Pukekos were enjoying the wet paddocks which they were sharing with a number of rugged up horses from the nearby riding club. Along the path we also saw plenty of smaller birds such as Yellowhammer and Chaffinch.
While talking to one of the locals, several Fantails were flittering above our heads then Bob pointed out that they had a nest which they would be protecting.
For me, walking along to the sound of Bellbirds echoing in the pine trees and the water reflections made this trip for me very enjoyable. It was also good to see that this area is being developed with lots of plantings along the tracks.
We finished the morning with coffee and a chat at Metro Café.
Thank you Peter for organising this trip for the group. 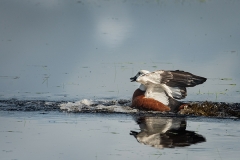 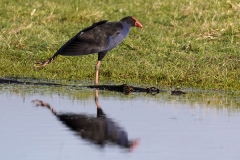 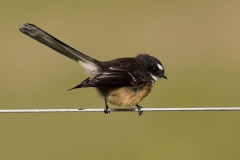