On a mild winters morning seven keen NPS members met near Ferrymead golf course then wandered the track bordering the Heathcote salt marshes. It was low tide with the river draped like a silver ribbon across mudflats dotted with snails and Kingfishers, darting and diving for small crabs, were in abundance. Most were a little way off but I’m sure there will be some great shots to share. And amongst the various gulls and shags a lone spoonbill winged in to give a cameo performance before taking off for better feeding grounds.

Moving on to the estuary Maureen spotted a small group of godwits feeding in the shallow pools on the mudflats. Following more long range shots we all adjourned to a nearby cafe for well earned coffees.

Thanks Jane for organising a great morning out. 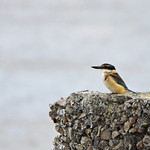 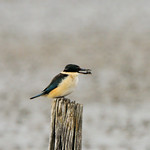