A group of 14 went with Steve Attwood for the day to various areas along the shore of Lake Ellesmere, where a few of us hadn’t been before. The weather was fine, with a stiff breeze to contend with. The water level was quite low.
First port of call on Kaitorite Spit showed us Dry cracked Lake Bed covered in a profusion of colour from  yellow: Yellow Buttons, purple: Native Musk, and white: Montia Species. There were Terns and Black-backed Gulls nesting, also in residence were Pied Stilt and a pair of Banded Dotterills with chicks.
2nd stop we saw Royal Spoonbills in the distance, so moved onto Sunset Point near Kaituna. There was more bird-life in the form of Spoonbills, Canadian Geese, Black Swans and cygnets, Shags, Ducks, White-faced Herons, 1 Plover and 1 Pukeho…
Next stop was Greendale Sands which was a vast empty area which was damper than the other area and it had the Yellow Buttons and Native Musk, but no Montia Species, these were a lot smaller than the ones we saw before. Birds were along way off.
We decided we needed a coffee and called into the Store at Tai Tapu.

Thank-you Steve for an interesting day. Your immense knowledge and enthusiasm was very welcome and appreciated, and although the birds must have missed the emails, we now have new places to see them on another day. 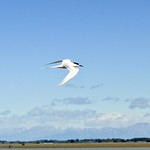 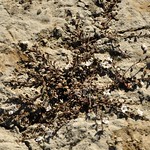 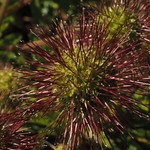 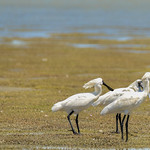 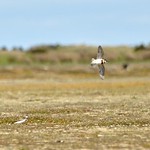