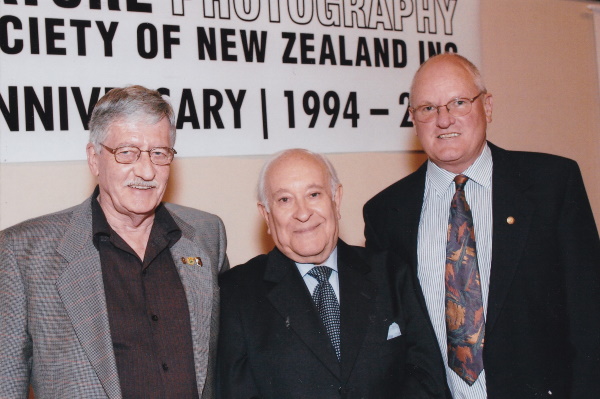 Matheson left us on April 19 2021, after a long and productive life, in his 95th year.  Thus another one of our NPS treasured members has gone.  Only memories remain of this gentle photographic craftsman, whose eye for the landscape was beautifully expressed in his many images that remain as his pictorial legacy.  I remember pestering him to write a book with his images and wisdom within, which, thankfully, he did as Chasing the Southern Light published in 2006 by Longacre Press.  One of my treasured possessions.  If it’s in your library, take it down and have another look at some of what Matheson contributed to New Zealand’s photography.  His contribution is vast.  Matheson was at home in the central Otago landscapes – especially the rolling hills and flowing tussocks of Lindis Pass.  The glint in his eye grew stronger and more vibrant there.

Matheson was a kind and attentive mentor for those of us building the framework for the Nature Photography Society of New Zealand, and spent many years on the Honours Board of our Society.  He loved being with those people who, like him, found inspiration in nature, and sharing his passion with others. His contributions in judging the presented work was always carefully considered, astute, and helpful.  Many of NPS members sought Matheson’s advice which he cheerfully gave to all.  He received an Honorary Fellowship to NPS: richly deserved for the time, effort, and wisdom he imparted to us.

Matheson was an expert and fun optometrist who looked after his many clients in south Dunedin for 46 years.  I was one of them.  I remember sitting in his chair, beset by everything optical, as Matheson pirouetted and danced around me, adjusting and tweaking this and that dial until all was clear and beautiful for me to see.  “That’s terrific!” he would say, and it was done.  Thereafter he kindly adjusted my glasses whenever we met. Matheson’s years of optometry no doubt honed his critical eye for discerning the right moment to press the shutter –  just when the landscape secretly smiled at him.

In 1982 I started the weekly photography courses at the University of Canterbury, which grew into the very popular Summer Schools in Photography held each year in mid January. Matheson was always on hand to set the scene, with his wonderfully wise missives on how to be a good photographer: on what to look for, how to craft the composition, of watching the light, and finally, knowing exactly when to make the photograph. And, he reminded all of us that the camera not only captured what was in front of the lens, but also the focus of the photographer behind it.

Matheson discovered, and fell in love with, audiovisual presentations. These were “absolutely wizard” to him. His set of six Kodak Carousel projectors were an awesome sight – something akin to the Borg craft from ‘Star Trek’. He became a world master of such presentations, receiving standing ovations for them. Well, mostly. Inspired, a group of us enrolled in his ‘How to make Audiovisual presentations’ class at the Summer Schools. We listened carefully to Matheson’s precise discussions, and then, finally, came his presentation. Out came the six projectors and the lights were dimmed.  On came the projectors  – and then – and then – armageddon happened.  Strange loud clacking noises arose, followed by thumping, as a fountain of his precious slides erupted from his projectors.  Matheson was visibly stunned, rooted to the spot.  This – was – certainly – not – happening – to -him.  I remember some moments later, laughing so hard that my knees failed me and I had to sit down.  Great mirth followed.  Matheson recovered: unblemished. And life resumed.

Matheson was a man for all seasons.  I remember him as a charming, thoughtful, and gifted photographic friend.  His dear wife Ruth has him now.  “What took you so long?” I can hear her say.  And so it is.  Blessings, and THANK YOU dear Matheson, for a life so beautifully and generously lived.