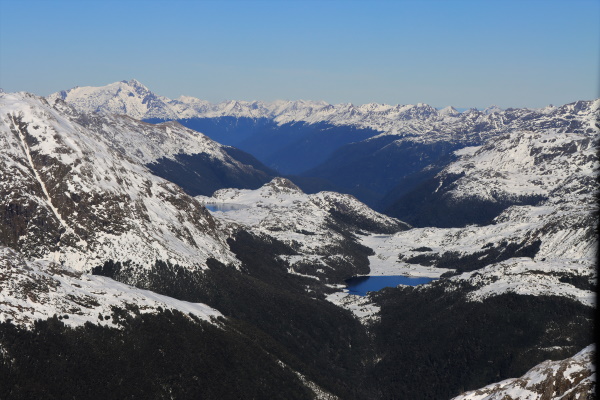 We woke up to a cold foggy Te Anau morning which delayed our departure.
We made good use of our time visiting the DOC bird park then the Sandfly Cafe to catch up with Sean and Maria the owners of Pure Salt.
The mist cleared and after a fabulous helicopter ride into Supper Cove we headed up Dusky sound to rendezvous with some dolphins at 1630 just as Sheryl had ordered.

The advantage of travelling south on the shortest day of the year was first light was just before 8am and sunrise wasn’t until 8.30 am, making it very easy to enjoy looking east down Dusky Sound while having breakfast.  We had spent the night in Ship Cove, where in 1773 Captain Cook had tied his ship the Resolution to a rata tree for 6 weeks while his crew recovered and repaired sails following 122 days at sea, searching for Great Southern land, south of New Zealand. A short trip in the RIB tenders and a walk took us up to Astronomers Point where Cook’s men had cleared about an acre of land and accurately fixed the geographical position of New Zealand.  Then a walk down to a freshwater stream where Cook set the first brewery to make spruce beer from rimu and manuka to cure scurvy with rum and sugar added to make it drinkable.

Next stop was Anchor Island and Luncheon Cove where the first European house and ship was built in New Zealand and the slaughtering seals started. The ship ended up being used by the survivors of the first European shipwreck, whose crew finished the ship and sailed back to Australia. There is very little left of these sites but we enjoyed exploring the beaches and coastal forests.  Jocy thinks a rock overhang she explored may have been home to a Maori family that met those early settlers. With a forecast for sea swells increasing, Matt our captain decided to head, 2 ½ hours in open seas, south to Chalky Inlet while we could. 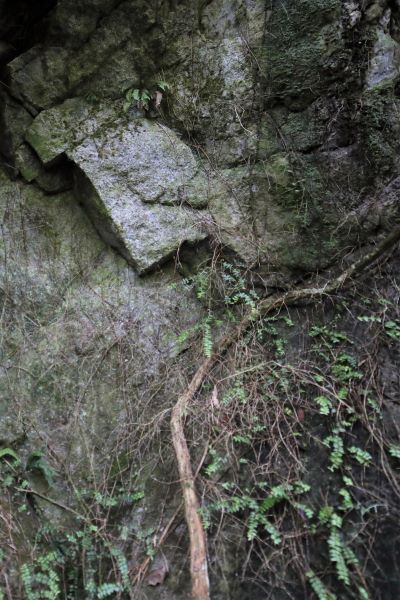 This morning we woke to slightly cloudy skies. After breakfast we set out in the two RIBs (Pepper and Chilli) to explore the shores around North Port. As we puttered along lots of photos were taken of trees that stuck out from others in the bush or were hanging over the water and of the rocks and patterns on them along the shore line. Eventually we came across the wreck of the SS Stella. This ship was scuttled in North Port after its usefulness as a ship was over. After scuttling it was used as a base for fishing as its refrigeration system was still usable. We went ashore behind the Stella for a walk on the beach. Here we found deer tracks and lots of little coral like structure washed up on the beach. We also found some Mistletoe in the area, a good indication that possum numbers may not be high in the area.

On returning to Flightless we sat down to another fantastic lunch before heading off to find a spot to go fishing for Blue Cod. Our first spot for this was not successful but our second spot was. We had about 10 fish caught with in about a half hour. While one group of us were fishing another headed off to look around the shore of the area we were in. Brad also went free-diving and caught a couple of Butterfish.

Once the fishing was done and the other party was back on board we headed off to our next evening anchorage at Lake Cove at the very top end of Edwardson Sound. Along the way we had a few Bullers and White Capped Mollymawks follow behind us. The Mollymawks did like eating the bits of Blue Cod that were biffed overboard as we prepared them for dinner. It was really nice to see the Pure Salt crew use nearly every part of the Blue Cod. For dinner we had a lovey meal of crumbed Blue Cod. 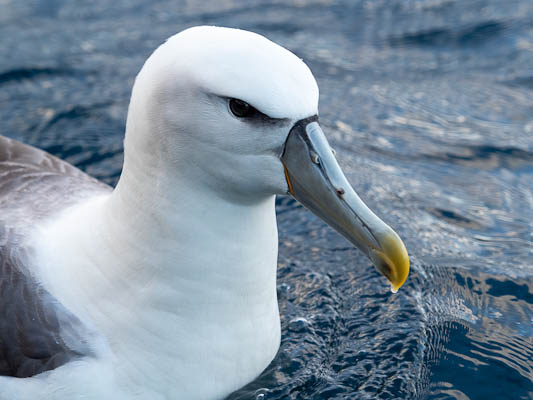 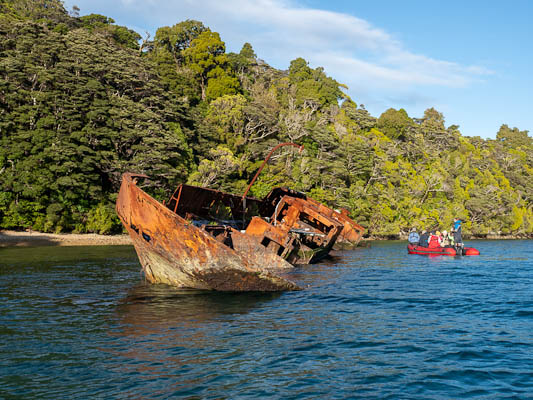 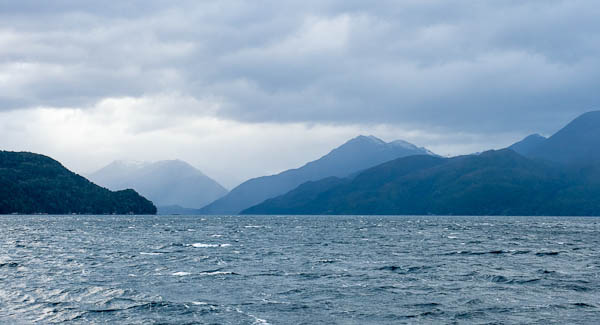 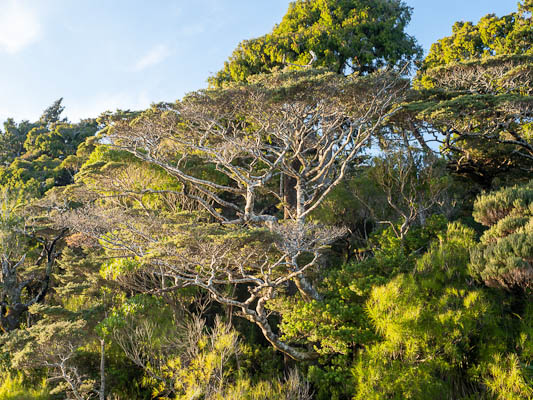 Overnight moored at Lake Cove, Edwardson Sound, Chalky Inlet.
Morning tiki tour around: Lumluma Creek, photographing foam on the water, reflections and more trees, then up to the waterfall coming from Lake Cadman.
Back to the Flightless to warm up and a yummy lunch of noodles, soup & buns.
Afternoon on the move, via Edwardson Sound, passing by Chalky Island for photographs of the white cliffs & headed out to sea for Preservation Inlet.  Spent night in Cuttle Cove near remains of whaling station & stamper battery. 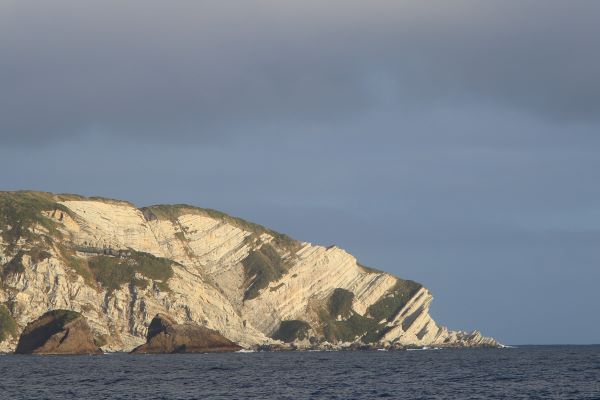 Sunday, 26th started at 8 am at the back of the boat with some hardy souls who went for a cold swim in their togs into Preservation Inlet.  Brr, but a great way to start the day and then into the hot spa pool to warm up.  Out in the tenders and morning tea at Cuttle Cove where the first site of a whaling station in NZ was, and explore the bush.

Mid-afternoon those that wanted to go snorkelling donned their wet suits, to the entertainment of the rest. And some fish were speared for once more a fantastic meal. 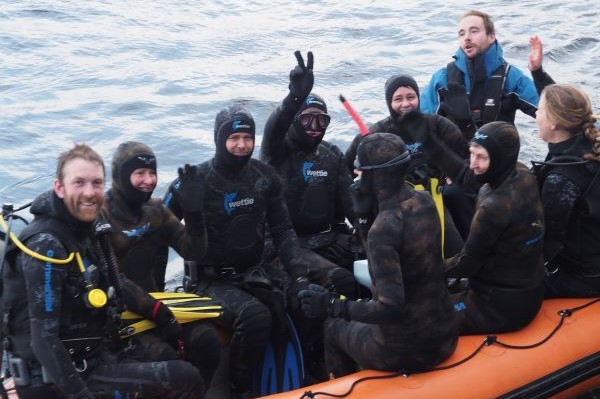 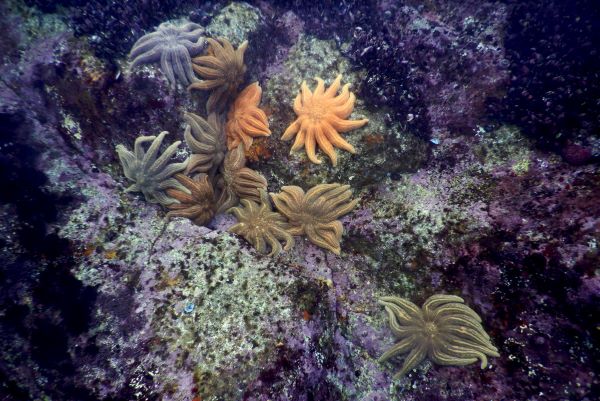 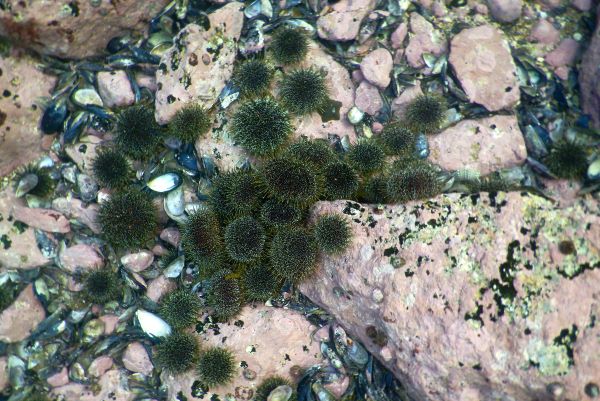 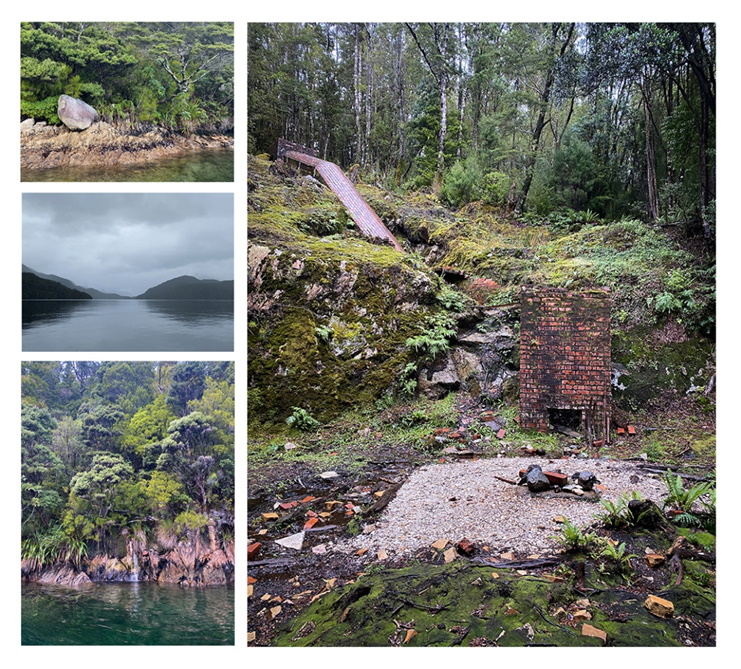 Some of us started the day with (the now customary) wake up dip in the ocean and warm up in the hot tub.
Tenders away to re-discover an old mineral smelter and continue to wonder just how anyone survived the conditions a hundred years ago without the technology of today.
After lunch, off to explore more majestic coastline with pristine crystal clear water and fauna on the predator free Coal Island…
Rounded off the day with freshly caught crayfish for dinner – thanks to the Brads’, Ingrid and Matt for another wonderful day in paradise, and feeling more connected to past, present and future!

A lovely sunny morning and despite warnings of a potential heavy swell, we had a very smooth landing on a beautiful golden sand beach. The “one to two” km walk to the Puysegur Point lighthouse turned out to be just over four km, but all the group made it and after a wonderful picnic lunch, served by the two Brads, and a lengthy session trying to get a photo of the group under the lighthouse, we headed back to the ship.
A deer was seen, but got away unscathed, however several members of the group saw and photographed a co-operative kaka, both on the way in and out. There were also many fantails and tomtits, no doubt feasting on the hundreds of thousands of sandflies that seem to inhabit the area.
The day ended with a visit to the former gold mining settlement of Cromarty, in Kisbee Bay, where we were invited into the private lodge by the caretakers, to see the museum that is maintained by the current owners. 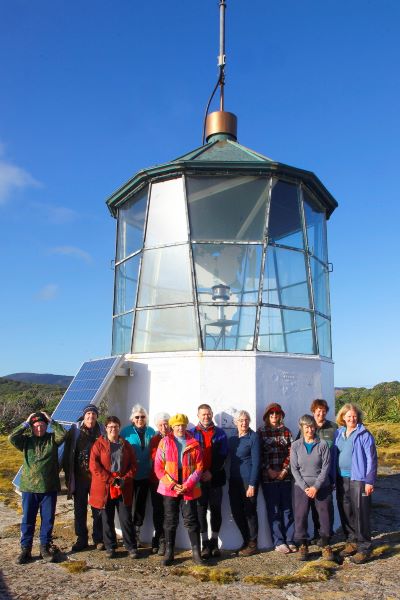 We woke in Brokenshore Bay to low cloud and drizzle and hoped it would stay that way so we could have another night on board.  However the cloud lifted as we motored up beautiful Long Sound.   We weighed our luggage and stepped on the scales anxiously after all the wonderful food Ingrid plied us with.  Luckily we didn’t top the 120kg average so no extra helicopter was needed. We flew over spectacular snow covered country, across Jackery Pass, into the Grebe, and on to Manapouri.

Many thanks to the crew of MV Flightless and my companions for a memorable trip. 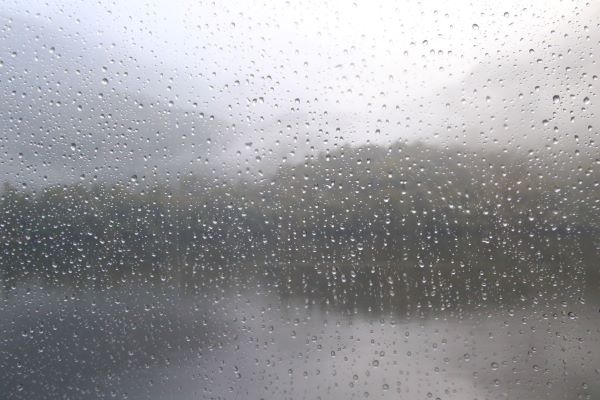 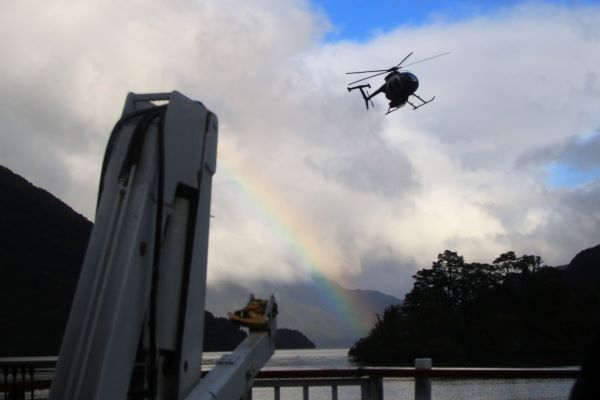 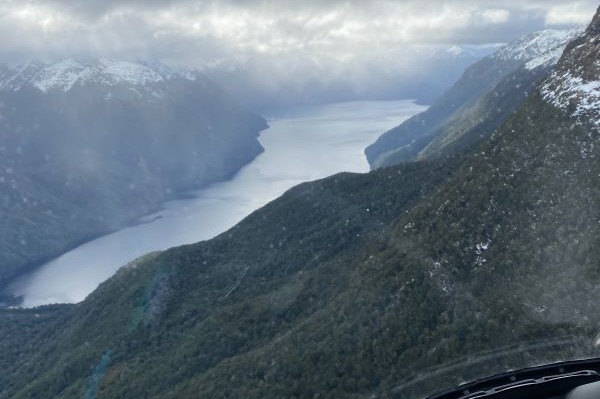