On a mild August Saturday that seemed to signal the start of spring 12 NPSNZ members met at the Little River Cafe for carpooling and instructions before following Jillian up and up and up and over the hill to Tumbledown Bay.

Once there we all trekked down the sloping pasture and onto a sheep track heading out to the northern headland of the bay and the spectacular Boaz sea stack situated just off the headland.  There were plenty of photo opportunities from this fairly precarious vantage point:  the sea stack, clay cliffs, seals, sea birds and endless sea & landscapes.  Climbing back out from the headland had its challenges but with some huffing & puffing we all gathered back at the cars for a well earned lunch.

Lunch over and it was down to the bay where at low tide the beach seemed to go on forever.  There were lots of nice rock formations, patterns in the sand and plenty of seals lounging around after their lunch on the rocks.  There was an abundance of seal pups one of which entertained us with its antics as it surfed the waves alongside some real surfers.  A real surfin’ safari.

Mid afternoon found us packing up and while some of the team took off to other photogenic spots nearby, the rest of us headed back to the Little River Cafe for the after match function before heading home.

Jillian, thank you for a well organised and enjoyable outing to an area where most of us had never been before. 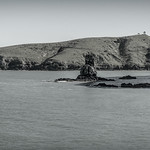 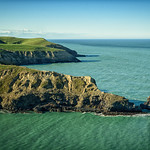 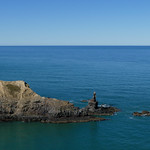 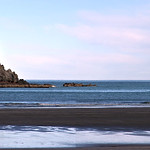 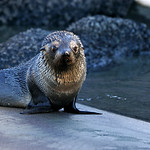