Seven fifteen am, Thursday 18 March saw nineteen Nature Photography Club members board our shuttles in Wellington bound for Paraparaumu and the ferry to Kapiti Island.  At Paraparaumu our bags were put through a bio-security check, to ensure we were not carrying foreign seeds or critters, then we boarded the boat for the ten minute ride access to the island.  But it didn’t quite go to plan. Our boat ran aground on the sandbar just off the beach – not once but three times.  (The amount of baggage belonging to club members may have contributed to the problem).  On our fourth attempt we were over the bar and across to the island where we landed at Rangatira Point.

We were first taken to see the two takahe that are at this part of the island and given a short talk by the DOC ranger about the history of the island and some of the bird life we may see in the area.  Most members hea

ded off up the Trig Track.  This proved to be a much more difficult trek than many had anticipated.  While a clear track, it was not well formed with lots of large roots and big steps.  When the Trig Track met the well-formed Wilkinson Track, several opted not to continue on up the Trig track to the trig itself at 521metres.  Views from here are extensive but a haze made it difficult to see clearly. Everyone had to descend via the Wilkinson track.  While a better formed track it was steep enough for legs to protest as they were used as brakes.  Part way down was a stitchbird (hihi) feeding station.

Mid-afternoon we were transferred by boat to Waiorua at the north end of the island.  Once we had been welcomed and shown to our accommodation, members were free to wander and indulge in photographing the abundant birdlife in the grounds around the lodge.  In the evening we were treated to an amazing meal and a talk by Wayne, the only permanent human resident on the island. He presented an informative and well-balanced history of the island, his family’s links to it and of the birdlife on the island.  Then came kiwi spotting.  Although we heard several, only a few saw a flash of one kiwi (pukupuku).

After breakfast the following morning photographers were free to either walk the Okupe Valley Loop track, wander around the boulder Bank Loop Track or alternatively stay around the lodge.  There was lots of bird life but, as we found out, photographing bird life is an exercise in patience.  You need to be quick and luck plays a big part in getting that amazing shot.  Late afternoon nineteen weary but happy photographers again board the ferry to return to Paraparaumu.

Zealandia is a 225 hectare eco-sanctuary of native forest being restored started around 1990.  It is surrounded by 8.5 kms of predator proof fencing and is right in the heart of Wellington City.

We took the cable car from Willis Street to the top, and then walked for half hour to Zealandia as the shuttle didn’t run for another hour.

We had an extended guided tour by Roy Sharp, a volunteer and ex Vice Chancellor of Wellington Uni, who gave generously of his time and knowledge.  He led us around the first quarter of the reserve (the rest apparently regenerating bush), pointing out birds and places of interest. The upper lake, the water level having been lowered because of earthquake risk, was the original source of Wellington’s water supply.  We crossed the dam to see some of the original workings.  The middle lake is being poisoned to remove perch that have become invasive.  Native eels and other fish have been removed to the lower lake, and are awaiting return when the water is clear.

We saw many birds including kaka (especially at feeding stations), lots of robins, tuis, bellbirds, saddleback, fantails, cormorants etc.  The highlight of the day was seeing numerous tuatara sunning themselves, including young ones on the clay banks after a night out.  The tuatara are thriving in this environment.

Eric is obviously on good terms with the weather gods as wet weather gear was not required at any time.  Many thanks to Eric for meticulously organising this trip. 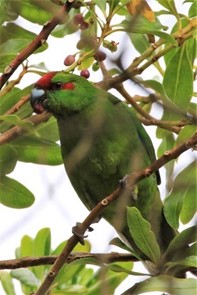 It was great for me to return to Matiu/Somes Island specially to see the replanting and regeneration of native plants rather than the grassland of 40 years ago.

Kākāriki (red-crowned parakeet) were not as plentiful as expected due to a karearea (NZ falcon) finding them a tasty lunch.  However, we saw a few feeding on Coprosma berries.  It was fun watching karoro (black backed gull) feeding their young, not so much fun for the young when they started to fly and were chased from the air by adult birds.  Photographing flying birds occupied much time.  We did see weta, skinks, and gecko but it wasn’t warm enough to tempt the tuatara from their burrows.

We enjoyed seeing historical artifacts as the island had been used as quarantine facility for ships arriving with infection diseases in the 18 and early 19 hundreds as well as cattle from foot and mouth risk areas in the 1970’s.  It was also a defence position for Maori during inter-tribal battles and during the second world war. It still has a working lighthouse.

After great trips to Kapiti Island, Zealandia, and as a bonus, Somes Island, a group of us set off to another reserve, Staglands, way up the Hutt Valley.  It was a good drive on a long winding road. There are so many hidden valleys around Wellington, complete with interesting places to visit.  We set off after a short briefing to see and photograph the animals living in the reserve.  It was a much quieter wander, and a pleasant way to end what had been a pretty active trip.  Among the mostly exotic animals in the park are reconstructed buildings showing the logging past of the area along with many items of interest from another era.  At the end of the trails was a nice café – complete with open fire – where we had a delicious lunch.

A huge thank you to Eric, and to Judy the support crew, for a wonderful trip.  Great weather, great company, and so many wonderful experiences.  A special trip that will be talked about in the future and fond memories recalled.