Despite predictions of unsatisfactory weather five intrepid photographers (Kristin, Gavin, Jane as well as Bob and Lynette) ventured to the Coast for a Fungi forage.  The recent heavy rain had caused major damage to the fungi in the region however with a few fine days next weekend’s group should have an interesting time.  The visit to the Arnold River walkway on Saturday revealed some excellent specimens among the waterlogged and damaged organisms.  Murry Cave made a reconnoitre to check out the starfish at 12 mile beach however the surf proved too much and recommended abandoning a visit so caught up with us on the track to Coal Creek falls late in the afternoon.  Murry joined Lynette and me for a pleasant meal at Ali’s in the evening.

Murry led us on the Sunday visit to Nelson Creek on the way home and had another interesting day with a huge variety of delicate fungi, not as badly damaged as those at the Arnold, as well as quite a few emerging after the second day with minimal rain. 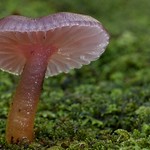 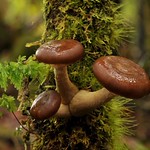 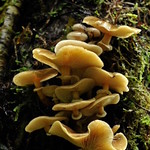 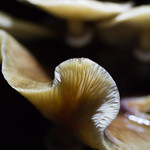 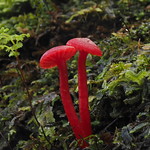