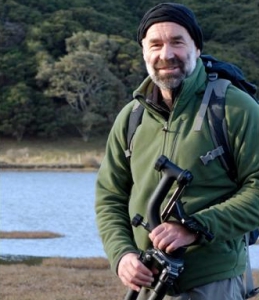 Dunedin based computer software developer Craig McKenzie started with photographing wildlife in his backyard and as a way of recording tramping trips. He quickly graduated from the usual local suspects to difficult to find species in remote locations. These days he photographs least once a week in different spots around the South Island and it has become a “bit of an addiction”. Craig specialises in wildlife photography, with a strong interest in endemic and native birds. Craig has almost 40 years experience in photography. He has won many awards for photography. He was recently awarded the highest honour from Forest and Bird- an Old Blue award – for his outstanding contribution to raising awareness of biodiversity through his photography. Craig photos have been featured in numerous books and magazines around the country and have won a number of awards.

Craig has extensive experience in judging photography including judging the Trenna Packer Salver in 2014 and numerous other competitions. Photography became a more serious pursuit in the early eighties when he joined the Dunedin Photographic Society and the Photographic Society on New Zealand. Over the years he has entered the PSNZ National exhibition, the Dunedin Festival Salon of Photography and other similar national exhibitions sporadically. As time went by he found himself on the selection panel for these exhibitions on several occasions. Craig has also judged and commented on the work of many clubs, mostly in the South Island.